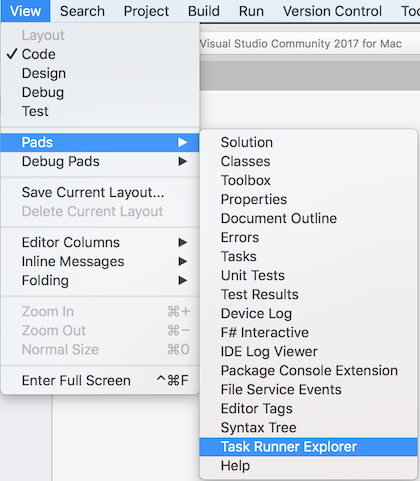 Currently changes made to tasks will not be detected automatically. To refresh the task information you can click the Refresh button available at the top left of the Task Runner Explorer window.

Output from the task is shown on the right hand side of the Task Runner Explorer window.

A long running task, such as tcs watch, will run until the solution is closed, or the Stop button, available on the right hand side of the Task Runner Explorer window, is clicked.

Tasks can be configured to run when the following IDE events occur:

To configure a task, right click it, select Bindings and then select the event.

The binding will be displayed in the Bindings tab and will also be shown as checked when the context menu for the task is opened.

The order in which the tasks are run for a particular IDE event can be changed by right clicking the binding in the Bindings tab and selecting Move Up or Move Down. 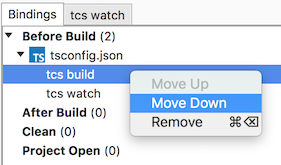 The binding information is typically saved in a file in the same directory as the corresponding task runner file, however this depends on how the task runner is implemented.

In preferences there is a Task Runner Explorer section which shows a check box that can be used to enable or disable the automatic running of tasks on opening a project or solution, and when building or cleaning. 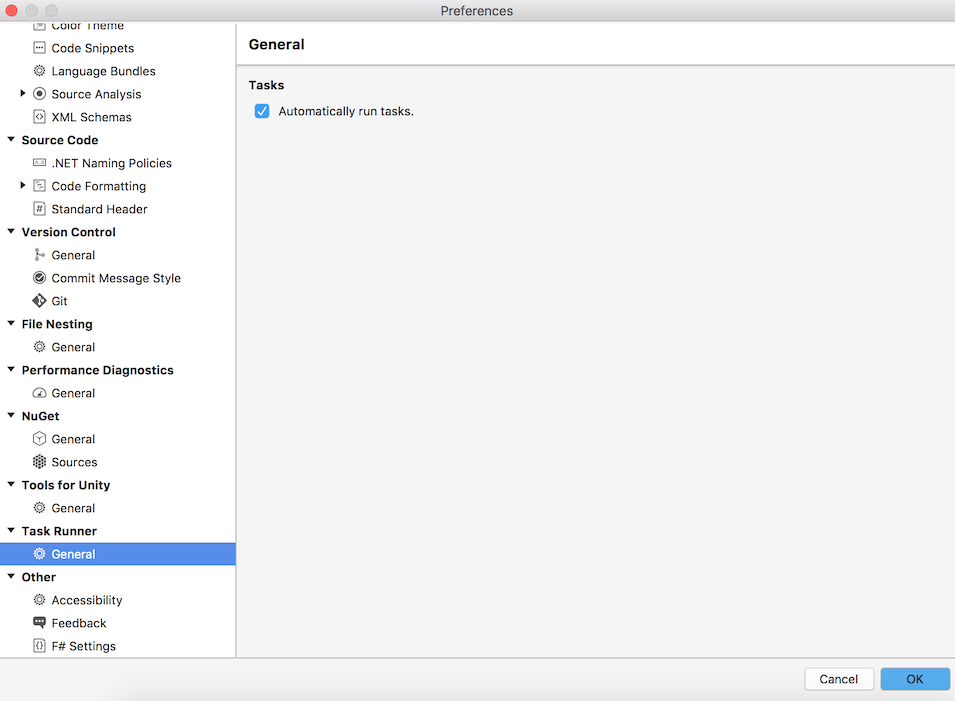 This is based on the Cake Task Runner for Visual Studio.

Gulp needs to be installed separately.

Grunt needs to be installed separately.

The NPM task runner is a port of Mads Kristensen’s NPM Task Runner.

The NPM task runner supports running with the verbose NPM option defined. If a task is selected then a button will be displayed on the left hand side of the Task Runner Explorer window. If this is selected then npm will be passed the -d argument when it is run.

NPM needs to be installed separately.

There are two addins to be installed:

The Task Runner is the main addin. This will be used by other task runner addins and provides the main task runner API and services.

The Task Runners Bundle addin contains the Cake, Gulp, Grunt, NPM and TypeScript task runners. These are currently included together as a single addin instead of being distributed separately.

Download both of the above .mpack files. Install the Task Runner addin first since the Task Runners Bundle addin depends on it. To install an addin’s .mpack file, open the Extensions Manager by selecting Extensions… from the main menu. Click the Install from file button. Select the .mpack file and then click the Open button. After installing both the addins restart Visual Studio for Mac.

These addins are not currently available from the main Visual Studio for Mac extensions server.