More information on all the new features and changes in Visual Studio for Mac 17.0 can be found in the release notes.

Visual Studio for Mac 17.0 now runs on .NET 6 instead of Mono. This means the NuGet.Config file location has changed.

One workaround is to store the passwords in clear text in the NuGet.Config file.

This can be done via dotnet nuget add source.

Or by editing the ~/.nuget/NuGet/NuGet.Config file.

Now that Visual Studio for Mac 17.0 runs on .NET 6 it is also affected by NuGet not being able to store encrypted passwords in the NuGet.Config file.

If a NuGet package source with a password is created in Visual Studio for Mac 17.0 the password will be stored in the Keychain rather than using a clear text password.

In Visual Studio for Mac 8.10 when the package sources where saved in Preferences – NuGet – Sources any clear text passwords were encrypted in the saved NuGet.Config file.

In Visual Studio for Mac 17.0 package sources that use clear text passwords will not have their passwords encrypted in the NuGet.Config file.

Support NuGet restore with .NET MSBuild and MSBuild on mono

In order to support classic Xamarin projects, and projects that require mono, Visual Studio for Mac 17.0 supports MSBuild on Mono and dotnet msbuild.

If any project in a solution has mono as a target runtime then the solution is restored with MSBuild on mono. If all projects target the dotnet runtime then dotnet’s MSBuild will be used. This prevents the restore failing for classic Android and iOS projects since dotnet’s MSBuild cannot resolve the Xamarin MSBuild targets files, causing errors similar to the following:

Integrated support for NuGetizer has been removed from Visual Studio for Mac 17.0. This is because the NuGetizer project is no longer being maintained.

dotnet pack can be used as an alternative.

More information on all the new features and changes in Visual Studio for Mac 8.10 can be found in the release notes. 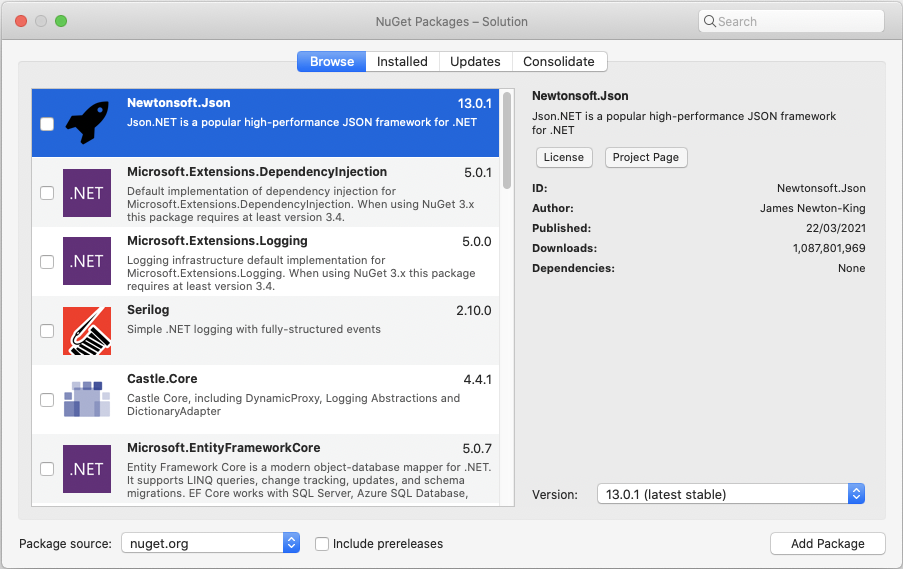 The following UI changes were also made:

A NuGet.Config file can disable package restore via a enabled setting, as shown below.

This is now supported in Visual Studio for Mac and will disable automatic package restore overriding the setting in Preferences.

Fixed automatic restore may still run if disabled in preferences

Certain actions in SDK style projects, such as saving a project file in the editor, and adding a reference to another project, would run a package restore even if automatic restore was disabled in preferences.

When a solution contains more than 10 projects then MSBuild is used directly to restore the projects. If a project was using the SolutionDir property to import an MSBuild file then this would fail since SolutionDir is not defined because no solution was being passed to MSBuild.

One way to reproduce this was to have an SDK style project that does not define a TargetFramework itself but conditionally imports a project, using a path that includes the $(SolutionDir) property, that defines the TargetFramework. The NuGet restore would fail with an error about an invalid framework identifier.

To fix this Visual Studio for Mac now runs the GenerateRestoreGraphFile target specifying the solution, not just the projects. This allows MSBuild to define the $(SolutionDir) property.

More information on all the new features and changes in Visual Studio for Mac 8.9 can be found in the release notes.

Updating all NuGet packages, from the Solution window, in a .NET Core 2.1 project would fail with an error.

More information on all the new features and changes in Visual Studio for Mac 8.8 can be found in the release notes.

If you are not signed in then the account sign in dialog will be opened when an Azure DevOps NuGet package source is accessed that requires authentication.

More information on all the new features and changes in Visual Studio for Mac 8.7 can be found in the release notes.

The NuGet packages shown in the Solution window in the Dependencies folder would not show child dependencies when .NET Core 3.1.401 SDK was installed.

The ResolvePackageDependenciesDesignTime MSBuild target’s behaviour changed in .NET Core 3.1.401 to no longer return the full set of NuGet dependencies and now returns only the top level depdnencies.

The logic that was originally in this design time MSBuild target has been added to Visual Studio for Mac so the full tree structure of the NuGet package dependencies can be displayed in the Solution window.

Restoring an ASP.Core project targeting .NET 5 would fail with an error when the ResolvePackageAssets task was run.

NuGet 5.7 introduced a new AliasesProperty to the LockFileItem class. MSBuild in Mono 6.12 uses NuGet 5.6 build tasks which do not support this new property causing the NuGet restore to fail.

Test adapter NuGet PackageReferences defined in a Directory.Build.props file were not considered by Visual Studio for Mac. This resulted in the Unit Tests window not showing any unit tests. Only when the test adapter PackageReferences were in the main project file would tests be discovered.

Fixed dependent projects not being restored after project reference added

Running a restore for the solution would fix this build warning.

With two SDK style projects referencing each other as follows:

If a new SDK project was added, and ProjectA referenced it, the restore would only occur for ProjectA not ProjectB. This would mean the Lib project was not available to ProjectB until a restore was run for ProjectB or for the solution. Depending on the NuGet packages used this could result in build warnings.

To fix this all the projects, that reference the project which is modified due to the new project reference, are now restored.

vstool is an application that is included with Visual Studio for Mac and provides a way to run some IDE features from the command line. When one of these features used a project that required an SDK provided by NuGet it would fail to resolve and download that SDK.

For example, running the following would fail to resolve SDKs provided by NuGet packages.

An error would be reported:

The NuGet SDK resolver would fail to find the NuGet.Credentials.dll causing vstool to fail.

To fix this the NuGet.Credentials.dll is pre-loaded by Visual Studio for Mac so it is available in the AppDomain when vstool is run.

More information on all the new features and changes in Visual Studio for Mac 8.6 can be found in the release notes.

NuGet supports configuring the location of the following global folders:

The above folder locations can be found by running the following command from Terminal.

Here we will take a look at how these can be configured for use by Visual Studio for Mac 8.5 when running on macOS Catalina.

If only the global packages folder needs to be configured then the simplest way is to define the globalPackagesFolder folder in the ~/.config/NuGet/NuGet.Config file.

Visual Studio for Mac will need to be restarted before it picks up any changes to the NuGet.Config file.

When Visual Studio for Mac is run from the Dock, or from LaunchPad, it does not inherit these environment variables.

Let us take a look at how we can define these NuGet environment variables so that Visual Studio for Mac will use them without having to launch it from the Terminal.

Replace the NuGet paths /Volumes/YourDrive/NuGet/ defined above as required.

Restart macOS to have this Launch Agent run.

After restarting you can check the environment variables are being used by NuGet by using the command line:

Now when Visual Studio for Mac is launched from the Dock, or from LaunchPad, it will use these custom NuGet folders.

launchctl setenv defines environment variables globally so they are available to all macOS applications launched with launchd.

More information on all the new features and changes in Visual Studio for Mac 8.5 can be found in the release notes.

Plugins are self-contained executables which provide credentials for NuGet package sources. One example is the Azure Artifacts Credential Provider which Visual Studio for Mac can now use whilst it does not have integrated support for accessing packages sources available from Azure DevOps.

Restoring or installing a NuGet package into a project that uses PackageReferences was bypassing the native macOS HTTP handler.

NuGet 5.4 now supports defining custom INuGetResourceProvider factory that is used globally. This is now used by Visual Studio for Mac so all HTTP requests use the native macOS HTTP handler NSUrlSessionHandler.

More information on all the new features and changes in Visual Studio for Mac 8.4 can be found in the release notes.

The Browse, Installed, Updates and Consolidates tabs are now recognised as tabs by Voice Over. Previously they were being treated as text labels and Voice Over would not announce that a tab could be selected via Control-Option-Space.

The Id label has been changed to ID. Using ID allows Voice Over to announce it as I.D. instead of a single word. Note that some Voice Over voices, such as English UK, still announce the text incorrectly. Without changing the label text to be “I.D.” there does not seem to be a way of fixing this for all voices. System Preferences on the Mac can be used to change the pronounciation for certain words if required.

The package source combo box is now read by Voice Over as ‘Package Sources’. Previously there was no associated label information being read.

Keyboard can now be used to move across tabs

Previously it was not possible to tab across the Browse, Installed, Updates or Consolidate tabs.

This change will be in Visual Studio for Mac 8.4.2.

This has been fixed by explicitly setting focus back to the parent dialog when a child dialog is closed.

Updating two NuGet package references that have a strict dependency on a single version of another NuGet package, not explicitly added to the project, would fail in the Manage NuGet Packages dialog. This was because the update was being done one NuGet package at a time.

With an Android project that uses Xamarin.Forms this could happen when updating Xamarin.Essentials, an Xamarin.Android.Support.Core.Utils and Xamarin.Forms at the same time. The Xamarin.Android.Support NuGet packages depend on specific versions for their dependencies which can cause the update to fail depending on whether a NuGet package is updated on its own or in a group. The resulting failure would be similar to

Note that updating all packages in the project from the Solution window does not have this problem since there the packages were already updated together in a batch. 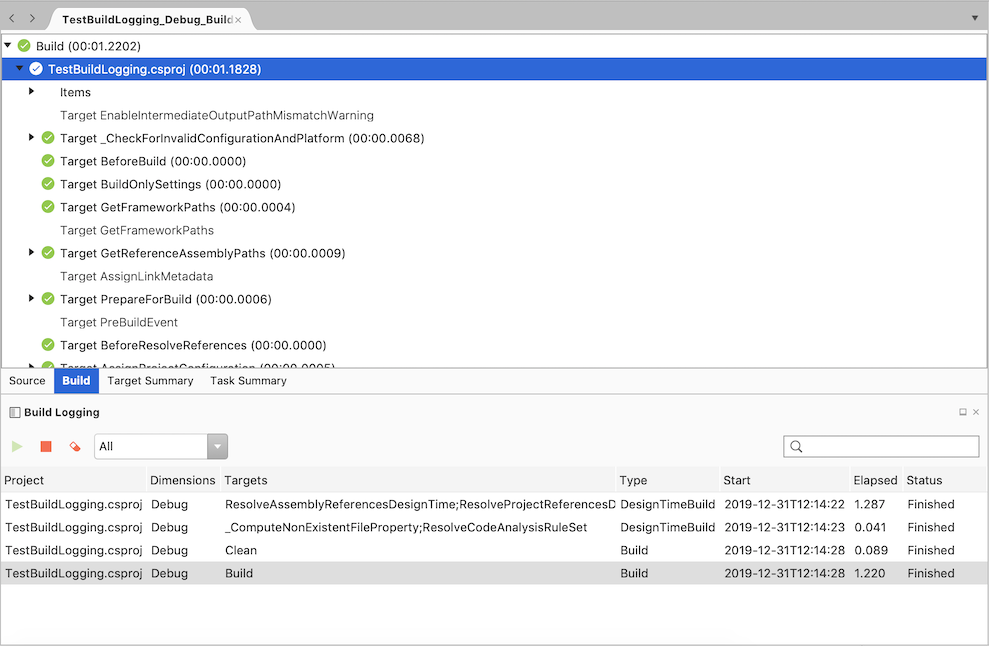 This is based on the Project System Tools available for Visual Studio on Windows and also re-uses code from this extension.

To open the Build Logging Window

Click the green arrow to enable logging for builds and design-time builds.

To filter the targets use the combo box to restrict the items shown to builds or design time builds, or use the search on the right hand side of the window. 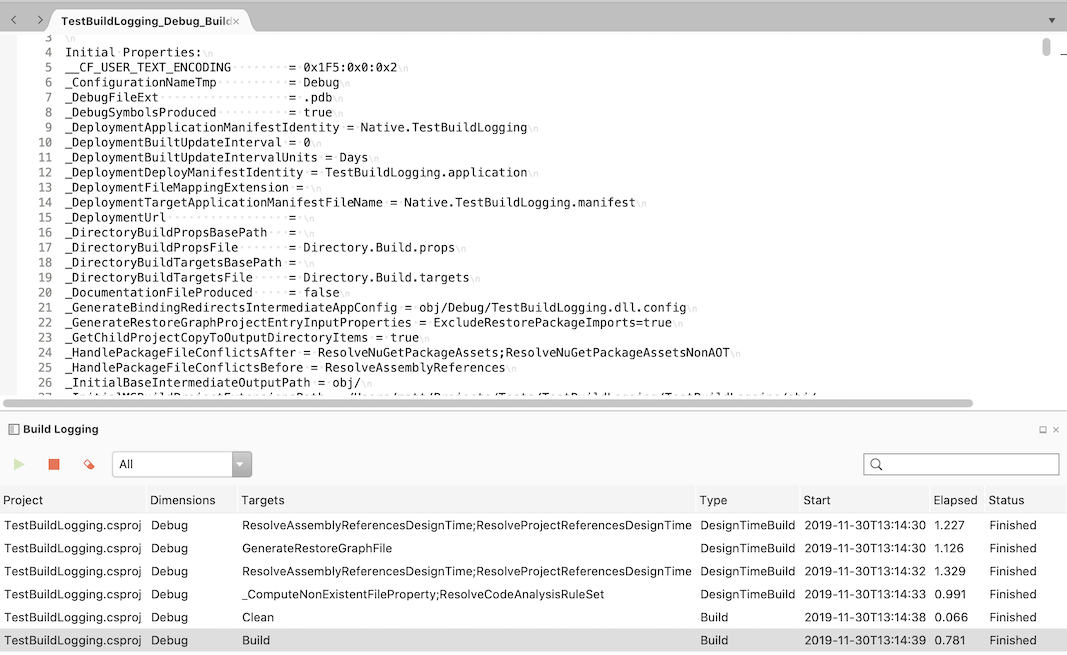 Note that binary logs are only available when the project or solution is built. Support for design-time build binary logs should be available in Visual Studio for Mac 8.5.

Three tabs are provided by the Project System Tools extension when a binary log file is opened. 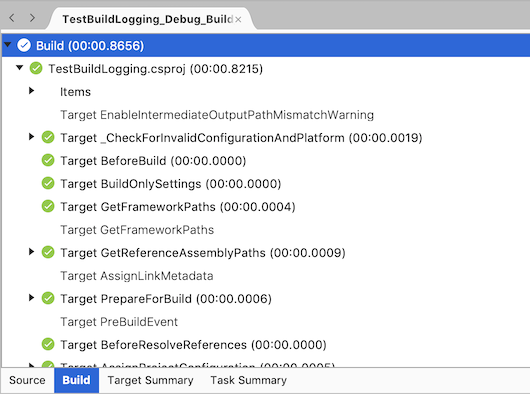 The Build tab shows the run times of the targets and tasks, and whether they ran successfully.

Skipped tasks and targets are shown in light grey text.

Selecting a tree node in the Build tab will show more information about that node in the Properties window. 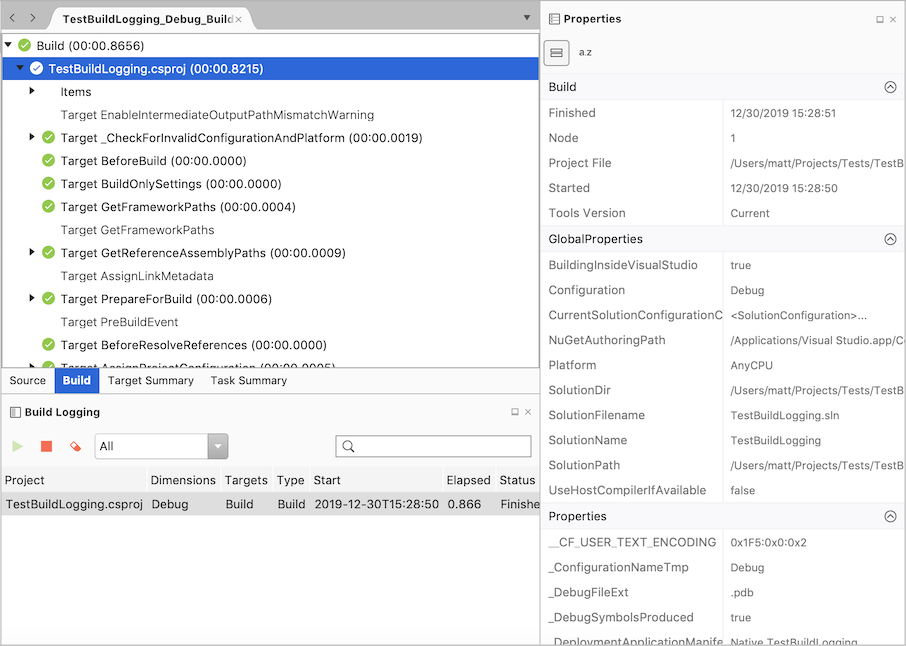 Targets are shown in the order they were run and can be sorted by clicking the column headers.

Tasks are shown in the order they were run and can be sorted by clicking the column headers.

The Project System Tools extension is available from the Visual Studio for Mac extensions repository. To install the addin: