Xamarin Studio 6.1 was released last week as part of the latest stable Xamarin Platform release and it includes changes made to the NuGet support.

More information on all the new features and changes in Xamarin Studio 6.1 can be found in the release notes.

Xamarin Studio now includes NuGet 3.4.3 which means project.json files are now supported and NuGet packages that only support NuGet 3 or above can now be installed.

The project.json file is a new package file format introduced with NuGet 3 which supports transitive restore. More detailed information on project.json can be found in the NuGet documentation.

An example project.json file for a .NET 4.5 library project is shown below:

Please note that there are future plans to move the information stored in a project.json file into the project file.

This can be added into your package sources in Preferences. It is also the package source that will be created by default if your global NuGet.Config file is missing.

This package version search was not easy to discover and so it has been removed and replaced in Xamarin Studio 6.1 with a combo box that allows a particular version to be selected. The Version combo box is in the bottom right hand corner of the Add Packages dialog as shown in the screenshots below. 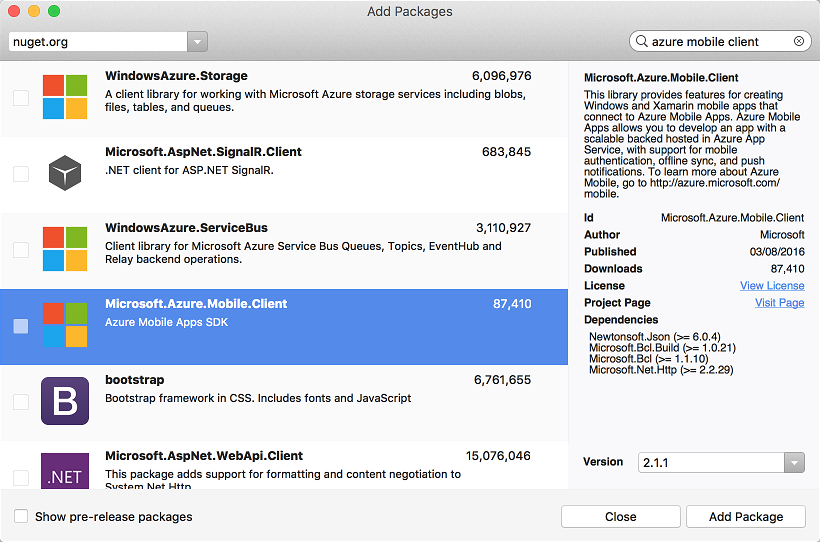 Note that in order to populate the version combo box a second request is sent to the package source so it may not show all the versions immediately.

Also note that for package sources which are local directories only the latest version will be displayed in the version combo box.

With Xamarin Studio you can now cancel the currently running NuGet package operation. This can be done by clicking the red Stop button in the Status Bar or in the Package Console.

When adding a package source in Preferences it is now easier to create a package source for a directory on your local machine. There is now a browse button which will allow you to browse to a directory and add it rather than having to type the full path into the text box. 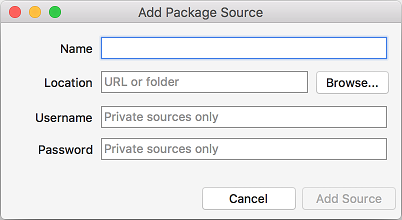 A NuGet package can now be removed when it not restored and is unavailable from all package sources.

With older versions of Xamarin Studio a NuGet package must be restored before it can be removed. This is a requirement of NuGet since it requires the original NuGet package to work out what has been installed so it can determine what needs to be uninstalled. NuGet can do more than just update the project file with references and MSBuild .targets files, it may add new files to the project or it may run app.config or web.config transforms.

NuGet version displayed in About dialog

The version of NuGet supported by Xamarin Studio is now displayed in the About dialog when the Show Details button is selected. 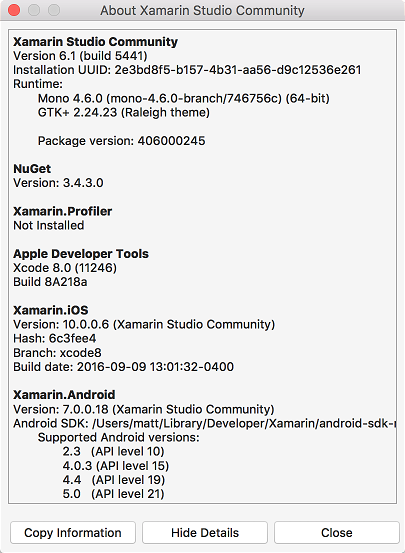 Custom MSBuild .targets files were not always added to the end of the project

Now .targets files are added as the last element in the project file. This also makes the behaviour consistent with how NuGet works in Visual Studio.

Custom MSBuild .props files were not added to the start of the project

Package restore may not work when you are offline even though the NuGet packages may be available in the local NuGet cache on your machine.