More details on all the new features and changes in Xamarin Studio 5.2 can be found in the release notes. Now let us take a more detailed look at the new NuGet features.

On opening a solution Xamarin Studio will check in the background for updated packages used by your projects. When the update check begins the status bar will show a Checking for package updates message.

If Xamarin Studio finds there are new updated packages available then the status bar will show a Package Updates are available message.

The Solution window will show information about the updates in the Packages folder. 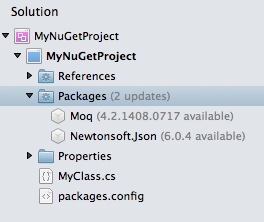 Note that Xamarin Studio will only show updates that are for non-pre-release packages.

The automatic package update feature can be disabled in Preferences by unchecking Check for package updates when opening a solution. 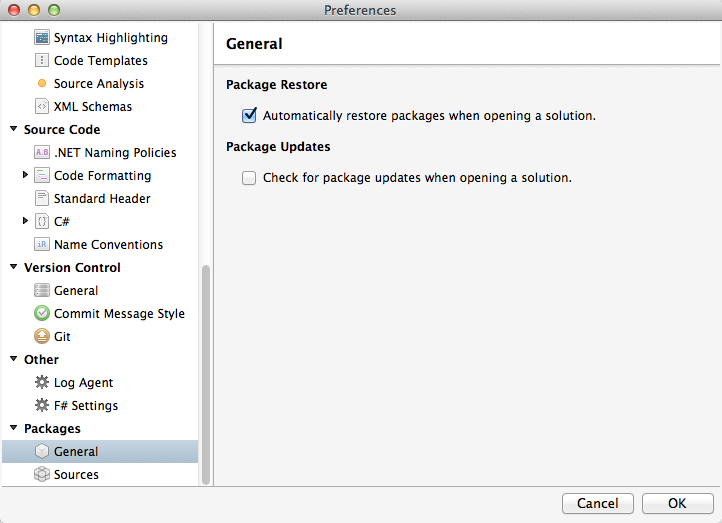 In Xamarin Studio 5.2 if you change your project’s target framework then the NuGet packages referenced by your project are checked to see if they are still compatible. The result of this check is displayed in the Package Console.

In the screenshot above the project’s target framework was changed from .NET 4.5 to .NET 2.0 whilst the project had the Json.NET and Moq NuGet packages installed. Json.NET is compatible with .NET 2.0 and can be retargeted. Moq does not support .NET 2.0 and is not compatible.

To retarget an individual NuGet package you can select the package in the Solution window, right click and select Retarget. 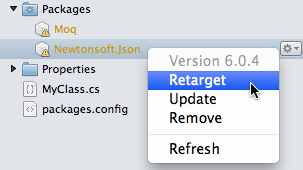 Selecting Retarget will remove the NuGet package and then add it again so the correct assembly is referenced by your project. The status bar will be updated as the package is retargeted and full details can be seen in the Package Console.

The Retarget menu item is only available if NuGet packages need to be retargeted.

Note that if you retarget a NuGet package that is incompatible with your project’s target framework then the retargeting will fail and the NuGet package will be removed from the project.

Note that if you make a change to the repositoryPath whilst the solution is open you will need to close and re-open the solution for the changes to be detected.

Add all checked packages even if they are not visible

Xamarin Studio will also now add a Condition to the project file that checks the imported MSBuild .targets file exists. Without this condition the project cannot be opened in Visual Studio if the NuGet packages are missing.

As an example, if Xamarin.Forms 1.1.1.6206 is installed into a project the following Import element will be added.

Packages are up to date status bar message

If you have the automatic check for updates disabled and update one or more NuGet packages the status bar will now display a message indicating that the packages are up to date if there are no updates available. Previously Xamarin Studio would show a message that the packages were updated when they were not.

If you have automatic package restore disabled and you attempt to update a NuGet package the package will now be restored before the update is attempted. Previously this would fail when an update was available since NuGet looks at the old package to work out how to remove it from the project before updating to the new NuGet package.