The new console window is powered by Pash. Pash is a open source reimplementation of PowerShell that works with Mono and runs on Windows, Mac and Linux. It was created by Igor Moochnick and more recently development has been restarted by Jay Bazuzi.

The NuGet extensions addin is available from the MonoDevelop addin repository. To install the addin:

To open the console window, from the View menu select Pads and then select Package Console Extension. 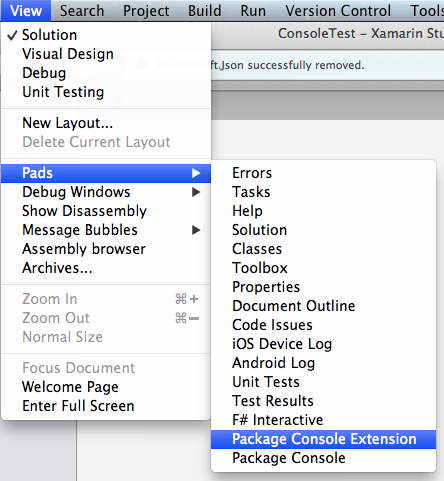 The top of the console window has drop downs allowing you to choose a different default package source or default project. At the top right there is a Clear Console button which will clear all the text from the console.

The standard NuGet PowerShell commands are available from the console window:

There is also a partial implementation of the Visual Studio object model (EnvDTE) which you can use from the console and from PowerShell scripts inside a NuGet package. Currently the Solution object and the CodeModel is not fully implemented when compared with SharpDevelop.

That concludes the introduction to the experimental NuGet Package Console in Xamarin Studio.