More information on all the new features and changes in Visual Studio for Mac 7.3 can be found in the release notes

Let us take a look at using xUnit in a .NET Framework project.

First create a .NET Framework Library project by opening the New Project dialog and selecting Library from the Other – .NET – General category.

Install the following NuGet packages into the project.

Edit MyClass.cs and add some xUnit tests, as shown below:

Building the project should then show the xUnit tests in the Unit Tests window. 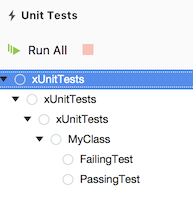 Note that, due to a bug in Visual Studio for Mac, the tests may not appear in the Unit Tests window if the xunit.runner.visualstudio was not available in the local machine’s NuGet package cache when it was added to the project. Closing and re-opening the solution should allow the tests to be discovered.

The tests can then be run or debugged in the usual way.

Currently MSTest is not yet supported in .NET Framework projects. The tests are discovered but they fail to run with an access denied error message:

The ASP.NET Core template names displayed in the New Project dialog have been changed to be more consistent with Visual Studio on Windows.

The template.json file used by the new templating engine uses a primaryOutputs property for projects and files. If the paths used contained backslashes then the project was not added to the solution.

Now the paths have the backslashes replaced with forward slashes if the current platform does not support backslash as a path separator.

The RestoreAdditionalProjectFallbackFolders MSBuild property is read and appended to the list of fallback folders stored in the project.assets.json file. The .NET Core 2.0 SDK will set this MSBuild property to point to the NuGet package fallback folder that is installed with the SDK. This will be used to resolve NuGet packages first before downloading them to the ~/.nuget/packages folder.

The RestoreAdditionalProjectSources MSBuild property can be used to add additional package sources to the existing list of sources used to resolve packages.

The RestorePackagesPath MSBuild property can be used to override the global packages folder location when a project uses a PackageReference.

Portable Class Library (PCL) projects could not be referenced by .NET Core projects or .NET Standard projects. The Edit References dialog would show “Incompatible target framework” for the PCL project when trying to add the reference.

Visual Studio for Mac now has the same behaviour as Visual Studio on Windows where a .NET Standard project can reference any PCL project.

If a file was deleted from a project, or removed without deleting, and the file was the last file for a particular wildcard include, the Update item for the file was not being removed from the project.

With a project that contained a single .cs file, and that file had an Update item defined, when the file was removed from the project, without deleting it, a Remove item was not being added to the project for the file.

Fixed Remove item not being added when file excluded from project

When the last file was removed from the project, but not deleted, an MSBuild Remove item was not added to the project for the file.

When a .xaml file in a project was deleted the associated Remove MSBuild item, if it was present, was not being removed from the project file.

All MSBuild items associated with the .xaml file should have been removed from the project file but instead a None item would remain.

Adding a new .xaml file to a project was not adding a None Remove item for the .xaml file to remove it from the default wildcard include for all files.

On reloading the solution the Solution window would show two .xaml files – one EmbeddedResource item and one None item.

With the primary operating system language set to Czech, creating a new .NET Core project would result in the project having a target framework of net461.

The problem was that Single.TryParse was returing true for an empty string when the machine’s culture was ‘cs-CZ’. This was causing the MSBuild condition evaluation to be treated as a boolean comparison incorrectly in some cases. The condition below would return false even though the property was not defined and both sides of the condition were empty strings:

This was causing the TargetFrameworkIdentifier to not be set for .NET Core projects so the default of .NETFramework was being used.

Fixed being unable to run a new Azure Functions project

Creating a new Azure Functions project would result in being unable to run the project until the solution was closed and re-opened again. After the NuGet packages are restored the project can be run but this information was not updated in Visual Studio for Mac.

Now after a NuGet package restore, when re-evaluating the project, the solution startup item is updated if there is no startup item already defined.

When the project capability is removed, due to a NuGet package being uninstalled, and the project can no longer be run the startup item will be updated if it was previously set to be this project.

Importing these files twice was causing a duplicate file to be added to the project information held in memory by Visual Studio for Mac when Xamarin.Forms 2.4 was used and no .NET Core SDK was installed. This would result in the content page xaml and associated C# file not being nested in the solution window.

An example is Xamarin.Forms 2.4 which defines wildcard includes:

Fix xaml.cs files not being nested

The DependentUpon property was being evaluated as ‘*.xaml.cs’. This was causing .xaml.cs files to not be nested in the Solution window.

If a Xamarin.Forms .NET Standard project had a .xaml file and a .xaml.cs file then the xaml.g.cs file would not be generated when the project file contained no files. The default items defined by the Xamarin.Forms NuGet package were not being imported. This then caused a build error about the InitializeComponent method not being defined.

Xamarin.Forms 2.4.0 uses default item imports which were not being included since they are conditionally imported and the MSBuildSDKsPath was not defined:

Deleting a file link in a .NET Core project would add a remove item for the file instead of removing the link from the project.