Xamarin Studio 6.0 was released last week and it includes a lot of new features, such as a new dark theme and Roslyn integration. This release also includes some improvements made to the NuGet support. 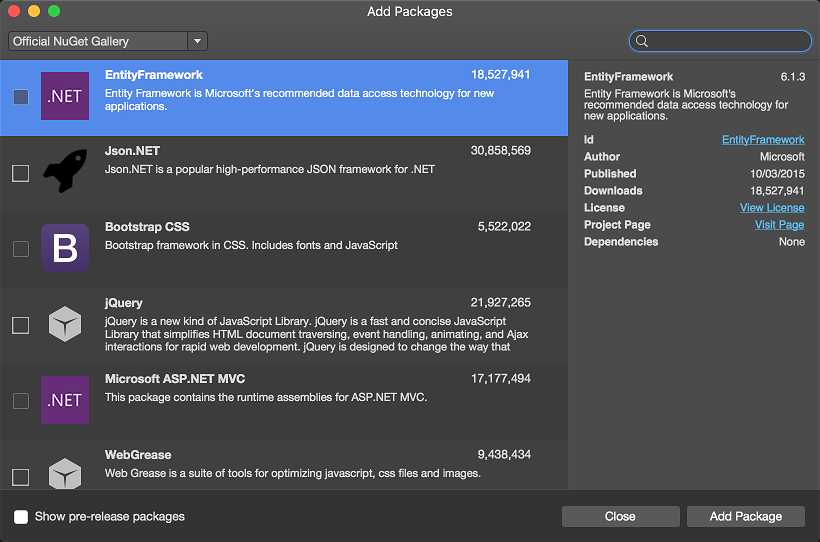 More information on all the changes in Xamarin Studio 6.0 can be found in the release notes. 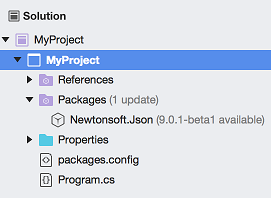 The Show pre-release Packages check box setting will now be remembered in the Add Packages dialog on a per solution basis.

Error dialog displayed if the NuGet.Config file cannot be read

Previously if the NuGet.Config file could not be read the error would be silently logged, but not reported, and Xamarin Studio would then switch to using the default official NuGet package source. Now an error dialog is shown indicating that there was a problem reading the NuGet.Config file.

Support NuGet packages that use icons from local files

A NuGet package can now use an icon, which will be shown in the Add Packages dialog, taken from the local file system using a file url. Previously this would fail with an invalid cast exception.

When an update caused a NuGet package to be uninstalled the Packages folder in the Solution window would show an incorrect count for the available updates.

NuGet restore and update not working for workspaces

With a workspace opened, or multiple solutions opened in Xamarin Studio, then restoring and updating NuGet packages would only work for one of the solutions.

The problem was that the AppCompat NuGet package is not involved in the initial NuGet package resolution using the remote package source so it is initially not considered for installation into the packages directory. When a package reference is then added to the packages.config file a search for a compatible AppCompat package was only using the local solution’s packages directory which fails causing the install to fail.

When installing a NuGet package using the Google Play Services dialog a package version is not specified by the dialog. If the NuGet package being installed was found in the local machine’s NuGet cache it would be used instead of the latest version from the official NuGet gallery at nuget.org. This could result in a lower version being installed than expected.