More details on all the new features and changes in Xamarin Studio 5.4 can be found in the release notes.

Xamarin recently announced a new Unified API for its iOS and Mac products. This new Unified API makes it easier to share code between Mac and iOS as well as allowing you to support 32 and 64 bit applications with the same binary.

To use this new Unified API you can create a new Unified project for iOS, or for Mac, using one of the project templates available from Xamarin Studio’s New Project Dialog. 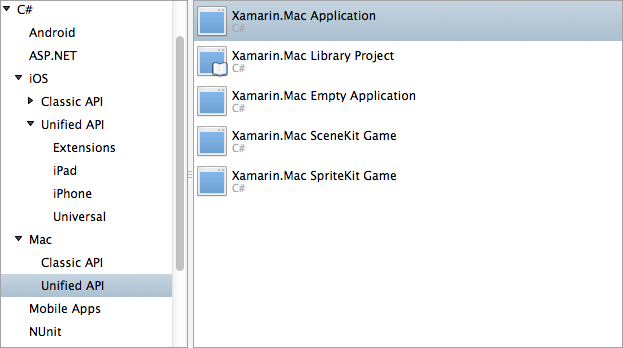 These Unified projects now support MSBuild and use the following target frameworks:

In order to support these two new frameworks the following changes were made to NuGet.

With these new Unified frameworks being recognised by NuGet you can now create a NuGet package with assemblies that specifically target these frameworks. The following shows part of a .nuspec file with framework specific assemblies for iOS and Mac being copied into the appropriate target lib folder inside the NuGet package.

The Splat NuGet package, created by Paul Betts, is one NuGet package available from the main NuGet gallery that explicitly targets both of the new Unified frameworks.

In order to be able to install a NuGet package containing PCL assemblies, such as Json.NET, into a Unified iOS or Unified Mac project you will need to have the PCL profile XML files for Unified iOS and Mac installed on your machine.

On the Mac you can get these new PCL profile XML files by installing Mono 3.10.0, which is currently available from Xamarin Studio on the alpha and beta channels.

On Windows, since NuGet 2.8.3 is currently only available as an alpha release, there is a separate installer which will register the Unified iOS framework with the PCL profiles on your machine and will also install an alpha version of Microsoft’s NuGet Package Manager 2.8.3 into Visual Studio.